MLGW does not generate power; instead, we buy power from the Tennessee Valley Authority (TVA) and distribute it to our local customers. In 2020, TVA produced 59% of its electricity from carbon-free sources. Having met its goal of a 60% reduction in CO2 emissions by 2020, compared to 2005 baseline, TVA has expanded its goal to 70% by 2030. This means that carbon footprints associated with MLGW electricity purchases have declined automatically.


Carbon Emission Rates:
TVA has provided the following information to assist MLGW business customers in understanding the carbon emissions associated with their power consumption. This data reflects the average for the 154 local power companies that distribute TVA power across the region—including MLGW—and is based on consumption from commercial customers on the General Power Rate, which is shown as “E-2” on the MLGW bill or ”GSA” online. CO2 emissions data for larger commercial and industrial customers on other electric rates is excluded from this average. (Businesses not on the General Power Rate should contact MLGW for their carbon emissions data, which will vary from the data shown below.) 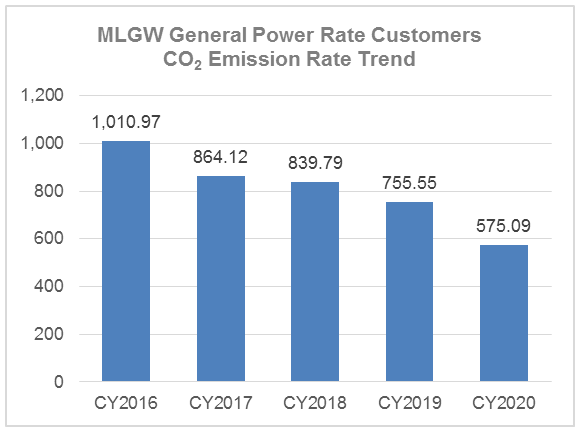 For customers consuming electricity under the General Power Rate, the CY2020 CO2 emission rate for MLGW electricity purchases is 575.09 lbs/MWh. The CO2 rates disclosed reflect TVA’s CY2020 renewable energy credit adjustment, which resulted in a reduction of 5.39% in the as-delivered CO2 lbs/MWh rate. Consistent with generally accepted carbon accounting standards and in response to customer requests, actual CO2 emissions have been annually allocated to customers in the same manner as costs.

This CY2020 CO2 lbs/MWh rate includes emissions and generation from TVA-owned and -purchased power. TVA does not create or transfer RECs from any of its hydroelectric sources. Therefore, consistent with CDP guidance, any hydroelectric * energy percentage disclosed by TVA in this letter can also be reported as renewable to CDP. This as-delivered aggregated generation was comprised of the resource mix shown at right. Renewables included 1.815% wind, 0.228% solar, 0.001% biomass and 0.174% biogas; while Null power included RECs-encumbered renewable sources that have not been retired to the generation mix or sold.


Your CO2 emission rate from TVA power is significantly lower than the current eGRID 2019 national and regional averages. Your company will benefit from using the CO2 emission rate associated with your MLGW electricity purchases, rather than the eGRID data, for Scope 2 carbon reporting. These rates and rates for other U.S. regions can be found at https://www.epa.gov/egrid/egrid-2019-summary-tables

Carbon accounting users will still need to quantify their Scope 2 emissions associated with electricity use for CH4 and N2O using their choice of default factors for these gases.


Understanding Carbon Emissions:
While all customers are sensitive to utility rates, some businesses/industries also compete on the carbon content of their specific products or calculate their overall carbon footprint. It’s not unusual for corporate buyers to select products or for investors to screen a stock or bond based on carbon performance. Companies also commonly include carbon performance in capital expansion decisions, which makes the CO2 emission rate of the energy resources used increasingly important.

Generally, there are three categories of CO2 emissions that companies calculate, similar to debits and credits in financial accounting.
MLGW recognizes that carbon footprint performance can be a critical factor in business decisions, so we are available to assist customers in reviewing CO2 reduction options.