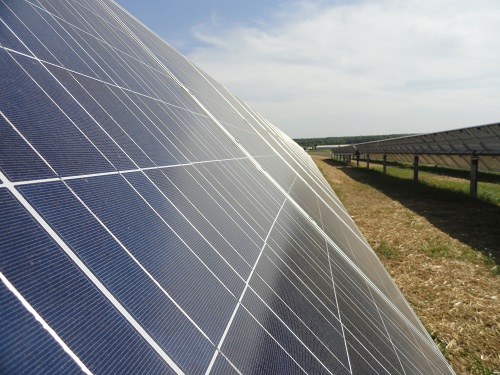 The project at Nike’s facility will produce solar power with panels similar to these at Agricenter International. At 2 MW, the new installation will be twice the size of that at the Agricenter.

MLGW has been awarded a solar generation project through the Tennessee Valley Authority’s Distributed Solar Solutions pilot program. In a competitive process that included 13 applications from local power companies throughout the Tennessee Valley, MLGW's project was one of seven selected.

The project includes the installation and operation of a 2-megawatt direct current solar array, which will be built at Nike Inc.’s North America Logistics Campus in Frayser. No MLGW funds will be utilized for the project, which will interconnect to MLGW’s electric distribution grid.

Nashville-based Silicon Ranch Corporation will fund, build, own and operate the system. Silicon Ranch is the largest developer, owner and operator of solar facilities based in the TVA service area.

“MLGW is pleased to collaborate with NIKE and Silicon Ranch in the construction of a large solar array in Memphis,” stated Jerry Collins Jr., MLGW president and CEO. “This project demonstrates the benefits of public-private partnerships to meet growing interest in renewable power options. We are excited to take a leadership role in increasing the amount of green energy in the region.”

The solar array is expected to generate approximately 3.7 million kilowatt-hours of electricity per year, or enough to meet the annual needs of 242 average households. Solar power from the array will be sold to TVA under a 20-year power purchase agreement, while Nike will receive the Renewable Energy Credits, the intangible environmental benefits associated with green power generation.

Although the timeline has not been finalized, the project is expected to start generating solar power in summer of 2018.

“As long-term owners of our projects, Silicon Ranch takes great pride in being excellent neighbors and active members in each community we serve,” said Matt Kisber, Silicon Ranch president and CEO. “We especially love working in our home state and are grateful for the partnership we’ve developed with MLGW, TVA and Nike. Each of these organizations deserves tremendous credit for their commitment to bring the economic, environmental and community benefits of solar energy to west Tennessee.”

"We are pleased to see the strong DSS interest because it allows TVA to partner directly with local power companies and developers to bring renewable energy to the Valley at the community level," said Tammy Bramlett, TVA's director of business development and renewables. "TVA remains committed to providing clean, efficient renewable energy to reduce our carbon footprint and help protect the environment."