Obviously, when it’s 95 degrees outside, no one is going to turn off their air conditioner completely between 1:00pm and 7:00pm on weekdays just because those are on-peak hours. But, customers may decide to raise their thermostat to 76 or 78 degrees so they use less during that period. Or, if they typically leave the AC blasting at 72 degrees while at work/school, they may decide to program their thermostat to 80 degrees while they are away. On really hot days, the AC is still going to operate—but less than it would have, so customers save. Find tips to maximize savings.


About Peak Hours and Your MLGW Bill

Save money by using electricity during low-cost, off-peak hours and minimizing use during on-peak hours: 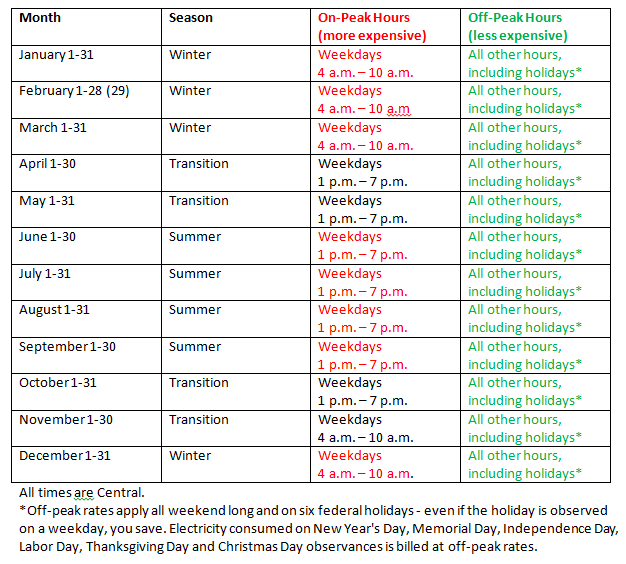 Customers with electric smart meters can use the Rate Comparison Calculator in My Account at www.mlgw.com to see the impact TOU would have on their bills.  Make selections for load shifting and conservation actions to see how you can control costs even more.  (Twelve months of smart meter data are required to get the most accurate calculations.)

"Smart Meters and Time Of Use (TOU) billing all proved to be incredibly effective tools to teach us the customers to be more informed and intelligent in our use of utilities. We hope the program will be rolled out system wide in the near future. It's a win for the consumer, MLG&W, our country and the environment."
William M.

"The most difficult part (of being on the TOU rate) was during the summer period between the hours of 5pm and 7pm.  It was difficult to avoid turning on the A/C.  The rest of the time it was really easy to adapt to the time of use schedule."
Timothy R.

"My costs for electricity dropped almost 50% once the meter was installed. That's all that needs to be said."
Ken W.

"We have become much more conscious of electricity use.  I have adhered to the Time-of-Use rate and saved on utility bills.  We have really appreciated your efforts to help (us) save energy."
Beverly N.